The Rogers Auto Group  can get you on the Road regardless of your credit and you can get your next car – What’s Better than That? Even if you have a bankruptcy or less than perfect credit rating, Rogers Auto Group has the car that you need. Our process is quick and pretty painless. Fill out our online application, and one of our loan specialist will contact you with the details. Wouldn’t it be wonderful to be driving your new or used car home today?

So don’t delay fill out your application.

We are located at

Car Credit: You are Approved

Experience the Rogers Auto Group difference: You are Approved

Our national network of lenders and our Auto Finance department will customize an auto loan solution that is right for you. By having access to multiple lenders we are equipped to arrange financing for consumers with all types credit. Whether you have good credit or bad credit or if it is your first auto loan we are here to assist you.

We have a wide range of new and used vehicles in stock  and we are able to find a vehicle that fits your needs. Simply fill out our on-line auto loan application and let our relationships go to work for you. The loan process is free and is pretty painless. Please contact us if we can answer any questions. Your Next Car is waiting at Rogers Auto Group. 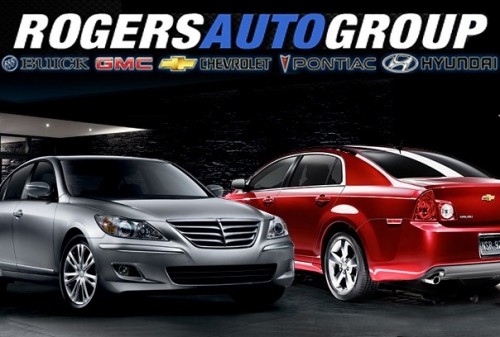 END_OF_DOCUMENT_TOKEN_TO_BE_REPLACED

The Sonata Hybrid will deliver a devastating blow to its opponents when it rolls into showrooms later this year. It’s roomier, more comfortable and much more handsome, with a hybrid system that cleverly balances fuel economy and cost.

Hyundai’s awkwardly named Direct Hybrid Blue Drive system can run on battery power alone up to 62 mph — an impressive feat that tops its competitors by wide margins. Once the engine takes over, it delivers 36 mpg in the city and 40 on the highway, beating the Camry Hybrid and giving the Fusion Hybrid a run for the money. Surprisingly, Hyundai accomplishes this with a lot of off-the-shelf components, keeping the cost down. Best of all, the Sonata hybrid’s sweeping lines, tasteful chrome accents and slick LED lights sets it apart from the field.

Direct Hybrid Blue Drive offers the compact packaging of Honda’s Insight, but the all-electric operation of the Toyota and Ford hybrids. Like Honda, Hyundai sandwiches an electric motor – 30-kilowatts (40 horsepower) in this case—between the engine and the six-speed automatic. But unlike the Insight, Hyundai added a computer-controlled clutch between the engine and motor, allowing them to disengage so the Sonata hybrid can run on battery power alone.

The 166-horsepower four-banger is similar to the engine in the rest of the Sonata lineup, but it runs on what’s called the Atkinson cycle, which basically leaves the intake valves open longer than usual. That increases fuel efficiency, but reduces torque. You won’t miss it, though. The electric motor puts down 151 pound-feet of torque as soon as you hit the accelerator, so the Sonata hybrid has good off-the-line punch.

Hyundai is the first automaker to use a lithium-polymer battery in a hybrid. It’s smaller and lighter than the nickel-metal hydride packs Toyota and Ford use, and it packs more energy into a smaller package. That means it can hold its charge longer while leaving a decent amount of space in the trunk. It’s also more thermally efficient, so it doesn’t need an elaborate — and expensive — cooling system.

Sedate drivers will easily see fuel economy in the 40-mpg range; hypermiliers can get more than 50 mpg. Even on hilly terrain — and with a few full-throttle starts — we managed a very respectable 38.5 mpg. You can thank the Sonata hybrid’s eagerness to drive electrically. With a full charge, you’ll go a good mile or so before the gas engine quietly kicks in to help. You can put it back in electric mode by coasting, or popping it into neutral briefly to shut off the engine. Moreover, the Sonata will stay electric at freeway speeds, a feat no other hybrid can match.

Like the Fusion Hybrid, the Sonata has a handy display that, among other things, encourages efficient driving by turning it into a game. Show some restraint and drive with a measure of eco-friendliness and you’ll earn points while watching a little globe turn green and blue. Mash the accelerator like a lunatic and it’ll turn brown. You also earn points that accumulate as long as you own the car. You won’t win any prizes, but you can brag to your Prius-driving friends about it.

With 206 horsepower from the engine-motor combo, acceleration is about the same as a regular Sonatas. Pay close attention and you’ll feel, and hear, the engine take over from the electric motor, but it isn’t terribly noticeable. The Sonata hybrid has the grabby, regenerative brakes common to hybrids, but you quickly get used to it.

Like its siblings, the hybrid is quiet at speed, and the firm ride is comfortable and controlled. It’s no sport sedan, but handling is safe and predictable, which, really is what most folks shopping for a mid-sized sedan want.

The interior features the same low-gloss plastics, soft-touch dash, plentiful storage nooks and comfortable seating as the rest of the Sonata line. There’s a standard USB port and Bluetooth, as well as power windows and doors, push-button ignition and a six-speaker audio system. The “premium package” adds leather, navi, a sunroof, a better stereo system and heated front and rear seats. This is a car you can live with daily and with all the gadgets and excellent fuel economy, it actually makes a good road-trip vehicle.

Hyundai hasn’t released pricing, if Hyundai stays true to form it’ll undercut the Camry and Fusion hybrids — both of which play in the $28,000 ballpark — by a couple thousand dollars. And that might be the final knockout punch that puts Hyundai’s competitors down for the count.

Keith Buglewicz is an occasional contributor to Wired.com and editor in chief of Family Car Review

Since introducing its excellent Genesis sedan in 2008, Hyundai has been hitting its competition hard. The sedan was followed by two more haymakers: the sporty Genesis coupe and then the ultra-luxe Equus. Now Hyundai’s added a battery and electric motor to the already impressive Sonata. The result is a vehicle that puts the Toyota Camry and Ford Fusion hybrids in a world of hurt.